When our bodies are affected by the aches and pains of arthritis, even the simplest tasks become difficult. We search for remedies wherever we can find them. We ask our friends, our family, our doctors how to alleviate our discomfort. When our furry friends feel those same effects of arthritis, they are unable to verbalize their need for help. Even though they are feeling the aches and pains, we need to tune into their non-verbal cues to hear the cry for help.

Have you ever wished your dog could jump up on the couch to snuggle next to you on a cold winter’s evening? Have you ever noticed your horse doesn’t move the same way he used to? According to the Western Pennsylvania chapter of the Arthritis Foundation, affects one in every five adult dogs, and is most common in larger breeds and in the bigger joints. Our furry friends typically get osteoarthritis, which is the ‘wear and tear’ type. It actually the most common source of chronic pain that veterinarians will treat in cats and dogs!

Ashley Boynes tell us the major signs of arthritis in your animal are:

In addition to healthy diet and exercise, you can help your arthritic pet through the use of Jin Shin Jyutsu, a natural, drug-free option that aides in pain-free living.

Jin Shin Jyutsu is an ancient healing art dating back many centuries. It was passed on through oral tradition, but over time, pieces of the art got lost and soon there was very little left to pass on. In the late 1920’s, Jiro Murai was diagnosed with a terminal illness. At the age of 26, he went to the family cabin in Japan to die. He spent his time in the cabin practicing ancient finger poses from Hindi tradition, meditating, and praying. On the seventh day, his family came to the cabin to get him and found that he was cured. This prompted Murai to spend the next 50 years trying to explain his miracle cure. He devoted the rest of his life to the study of ancient healing principles and recording them in the Kojiki (Ancient Record of Things) and the art Jin Shin Jyutsu was reborn.

Master Murai shared these principles with Mary Burmeister, who brought them to the United States. Mary continued Master Murai’s tradition by sharing her knowledge with students all across the country. Today, Jin Shin Jyutsu is practiced by thousands of people who have maintained its original physio-philosophy and practice. Through the application of gentle, non-invasive touch sequences, the pathways of energy in the body that nourish and sustain life are harmonized, aiding in symptomatic relief from many of life’s ailments. Because nature does not differentiate between human and animal, neither does the art of Jin Shin Jyutsu. The same sequences that can assist human clients can also be applied to our animal counterparts, with the same results.

One of the major benefits of Jin Shin Jyutsu for companion animals is that it can relieve symptoms of arthritis, as well as other degenerative disorders. Jin Shin Jyutsu has been used to help animals through emotionally traumatizing ordeals, and can shorten the recovery time after surgery. It also can be effective in calming anxious animals, as well as those having difficulty adjusting to new surroundings.

How can Jin Shin Jyutsu benefit our animal friends? A combination of periodic visits to a Jin Shin Jyutsu practitioner plus regular self-help sequences applied to the animal can improve mobility, health, vitality and well-being. Animals frequently respond faster to treatments because they aren’t so firmly attached to the unhealthy negative attitudes that can lead to chronic energetic imbalances, resulting in diminished health. 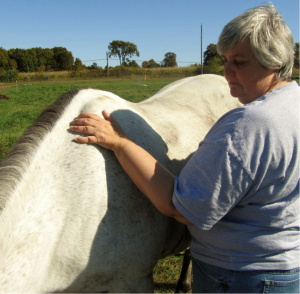 A 27-year old mare showed obvious arthritic symptoms – limping, hesitation when getting up, and weight loss. The owner was aware of the practice of Jin Shin Jyutsu on animals and decided to call a practitioner to see if it would help. The practitioner discussed the mare’s symptoms and health history with the owner, and proceeded to assess the animal’s energetic pathways. Then she placed her hands gently and precisely at various spots on the mare’s body, while concentrating intently on the physical responses. After numerous sessions, the mare became more mobile and it was apparent the symptoms were lessened. The owner was thrilled to see her spry companion return.